Hi friends! Are you taking part in #MIYMarch17 on IG? It's really good fun: a series of prompts for things to go and photograph. One such prompt was "Stash Bust", and I proudly took a pic of a skirt I was making for the little girl, using up fabric left over from making my husband some boxer shorts.   This made me realise that those boxers were still in my WIP box (work in progress, for those non-sewers amongst you). And all it wanted was the threading of the elastic. It seemed shameful to have something perfectly wearable not being worn, so I got right back to it. 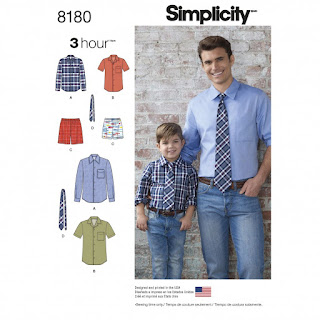 The pattern is simplicity  8180 which is a good value one IMHO, as it has several patterns (pants, easy shirt and tie) for the money, in both boy and adult sizes; and it's currently half price too, I notice. The shirt figures in my future plans.

The Hubs was game enough to have blog photos taken, as long as they were very close up with no identifying features visible! 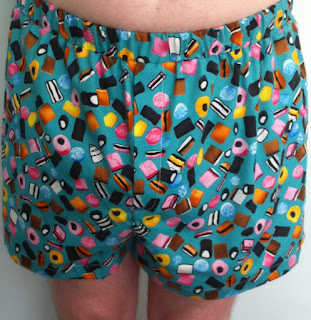 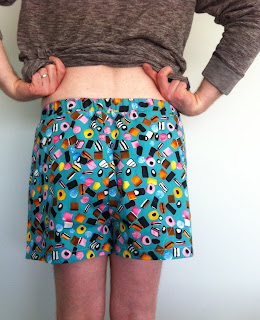 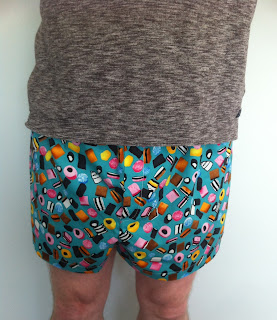 These are substantially smaller than "as drafted". The toile I made was like a pair of clown trousers down to his knees! No photos of that thankfully. He wore them all day and reported back that they were comfy; so, a success. I think I will make him a bunch of brightly coloured knickers.

Afterwards, I was left with a little piece of the fabric with which to make something for Small. A skirt seemed the obvious answer. I used a vintage pattern that was donated by a lady to the Brighton Sewing Bee meet-ups. She very kindly donated about a hundred patterns, and everyone there found something they liked. 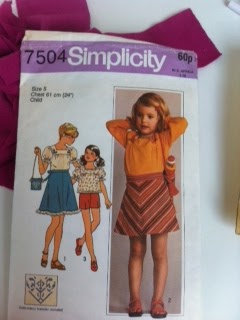 The skirt is bias cut, and would be great in a striped fabric. I hemmed this with bias binding, which has given it a bit of structure and helped to keep it in shape. 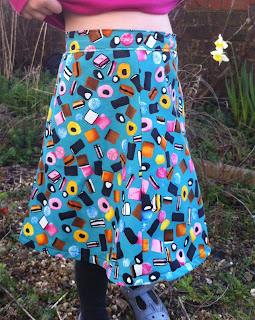 The fabulous fabric is from Fabricland and is available in different colourways. I may well go back and buy more at some point; the eldest suggested it would look good as a shirt for him, and I think he may be right. 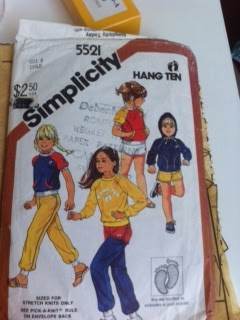 The top is also a vintage pattern, this time from Bobbin Along in Worthing, where they often have a few vintage patterns to chose from. I bought it for the tracksuit trousers, but sadly - as with some older patterns - it was missing vital pieces. Never mind, because the top is lovely. This is a wearable toile made out of a top of mine that I no longer wore, which had a small rip so was no good for the charity shop.  It's a lovely thick jersey, cosy and soft. I am really pleased with the fit for her: it's just a tiny bit long in the arm, but I shall not change anything as she grows so fast. I have the most beautiful bunny sweatshirting fabric that she is desperate for me to make it up in ASAP.  But there is a queue so she will have to wait. 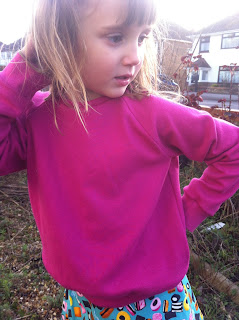 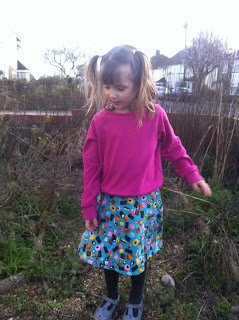 That's all for now, folks! Hopefully the next post won't be such a mish-mash! 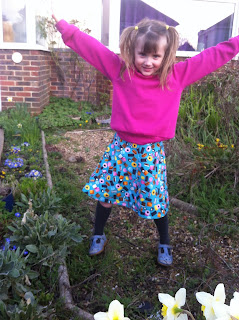